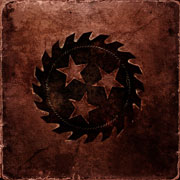 01. Make It Bleed 02. Hate Creation 03. (Cult)uralist 04. I, Dementia 05. Section 8 06. Faces 07. Dead Silence 08. The Night Remains 09. Devoid 10. Possibilities of an Impossible Existence
2012 Metal Blade Records
Our score 6
by Daniel Marsicano
7/7/2012
When a band names an album after themselves, a few stipulations must be in play. Either it's their first album, a measure to revive a dying career, or an easy way to recognize a shift in sound/major line-up shuffle. For Whitechapel, they take the approach Killswitch Engage used with their 2009 self-titled record; follow none of these rules and don't do anything different. Other than being more dynamic in places, this album is pretty much on par with their other records. Whitechapel doesn't break from the deathcore mold on their fourth album, though a few slight twists raises this above mediocrity. Most of these twists come at the beginning and end of the album, unless one's idea of a "twist" is when they get into a mid-paced stomp on "I, Dementia" and "Dead Silence." A subdued piano introduces the listener to the album on "Make It Bleed," which transitions to a thrashy outpouring broken up by acoustic-saturated bits. The piano that starts "Make It Bleed" returns to tie the album together in the outro to "Possibilities Of An Impossible Existence," a largely unmemorable closer beforehand. These instances succeed at putting the band across as thinking beyond the tight grip of their old style. While suffering from repetitive lyrics, "Hate Creation" feeds the fire set by "Make It Bleed" with lighter fluid. This fire dies down in the middle, and never fully gets ignited to the heights set early on. Most songs have a passionate burst of aggression tucked away, but it's only a reprieve from the chugging and screaming that waters down the album. Vocalist Phil Bozeman has worked on improving his vocals over the past number of albums. On this album, they have some character to them, after the stale barking that plagued the early material. His lyrics are still uneven, some of which are looking to incite a response ("(Cult)uralist" and "Faces") and others that are juvenile ranting with enough f-bombs to make him appear "tough" ("Hate Creation" and "Dead Slience"). Unless you're Iron Maiden, having three guitarists in a band is mostly unnecessary. Whitechapel have never been the exception to this opinion, and this album continues to underutilize the three guitars in their possession. "Section 8" comes the closest to making full use out of all the guitars, with an inspired break into screeching harmonies and a tech death-inspired passage. It's brief, but a sign of the ability present to make the guitar trio mean something in the grand vision of the band. Whitechapel could have used this album as a chance to reinvent their music, get into more death metal a la Job For A Cowboy or take the plunge into a more technical vibe. Instead, they stick to more of the same, which will satisfy fans, yet provide detractors new material with which to continue their vicious criticisms. There are moments, like the opener, where they seem on the verge of a breakthrough, but eventually regress to a familiar place of unexciting breakdowns and obscenity-laced ranting. Bottom Line: For Whitechapel, the chance to do something outside the deathcore box with their self-titled album is more of the same, barring a few noteworthy twists spread throughout.

dudes with hockey pucks in their earlobes are stoked for this

It's "detractors" not distractors.

"Stale barking". Bozeman has one of the best voices in the genre

Not sure what record you were listening to....sounds like Whitechapel have been able to take (the ever so stale) formula of "deathcore" that sooo many bands are doing, put a cool twist on THAT, then combined in with some of the best groove Ive ever heard from a band making music this heavy. It takes a few spins to let it all sink in...but once you "get it", this album smokes!!

nice review, and by nice i mean terrible. if you think this album sounds the same as the last id recommend taking the penis out of your ear