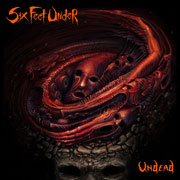 01. Frozen At the Moment of Death 02. Formaldehyde 03. 18 Days 04. Molest Dead 05. Blood On My Hands 06. Missing Victims 07. Reckless 08. Near Death Experience 09. Delayed Combustion Device 10. The Scar 11. Vampire Apocalypse 12. The Depths of Depravity
2012 Metal Blade Records
Our score 7
by Daniel Marsicano
5/31/2012
Six Feet Under's career has had its high marks (Haunted and Maximum Violence) and its share of low points (The three Graveyard Classics and Ice-T rapping on a track on True Carnage). For years, they languished under flaccid groove death metal, with one of the most boring rhythm sections in death metal history. It was either time for a change, or to pack it up, and Chris Barnes opted for the former. Enlisting the help of ex-Chimaira guitarist Rob Arnold and drum machine Kevin Talley, Six Feet Under revitalizes their floundering career with Undead. Arnold and Talley came into the picture after the departure of original members Terry Butler and Greg Gall. These guys had been with Barnes since the very beginning, so there was concern what would happen to Six Feet Under with the rhythm section gone. Arnold covered the bass tracks in lieu of a studio musician. Honestly, Butler and Gall were there to keep the beat, adding little to nothing to the band beyond that. Both new members are not as faceless in their pursuits. The music on Undead is the best the band have composed for years. Arnold and Talley inject the lifeless groove of mid-period Six Feet Under with an old-school mentality. Songs that once trotted in a monotonous pace now spark and shine with an ignition of fury. It's clear that this is a different unit - Six Feet Under v2.0 - and everybody else picks up the slack. For the most part, Chris Barnes sounds adequate, his vocals embellished with power that was lacking on Death Rituals. Guitarist Steve Swanson, the only other layover from the previous incarnation of the band, has a partner on the strings for the first time. Swanson bounces prime-cut death metal riffs off Arnold to mold the two musicians into a formable duo. Barnes is also known as the former vocalist of Cannibal Corpse, and while he has been doing Six Feet Under long enough to have that not be his defining legacy, a good portion of Undead could have came from that era. The album opens up with the wild "Frozen At The Moment Of Death," which is the first sign that this is not the same Six Feet Under of the past. "Formaldehyde" and "18 Days" enforces where the band's mind is; early ‘90s death metal given a modern touch-up. These two songs need less than three minutes each to prove their superiority. The mid-paced, groove-infused side of Six Feet Under is still a persistent influence, especially in the middle of Undead. "Blood On My Hands" slithers along with a sludgy bass line and one of the slowest tempos to grace the album. Talley puts some fire into the otherwise tedious "Missing Victims," and while "Vampire Apocalypse" fails on a lyrical front, the music makes its lengthy exposition more gripping than it should be. A few albums back, these songs would have been as bland as Barnes's appearance in a car commercial, but this group of musicians transforms them into noteworthy tunes. If a cynical death metal fan wanted to give Six Feet Under another chance for redemption, Undead may change their minds on the band. The songwriting is potent enough to cover up both the uneven vocals, and the latter half of the album trailing off before the rousing finish of "The Depths Of Depravity." A major lineup shift did wonders for Six Feet Under, and Undead is the strongest collection of songs the band has put out so far this millennium. Bottom Line: One of the band's best records since the mid '90s, Undead gives Six Feet Under the new life that it was previously lacking.

It seems like chris barnes made the former choice, you know, since there is a new record and all.

i was going to give this band a listen but after seeing chris barnes PMS all over twitter i've reconsidered.

Who the f*ck cares about lambgoat?

Barnes is such a stupid jerk.

you f*cking drones! who the f*ck is calling SFU metalcore?

Excellent CD, I have been listening to it nonstop the past week or so. Barnes sounds brutal as hell. 8/10

Great album. Best of their collection. It's pretty dumb internet bro's are missing out on great music because of some silly hatred for Chris Barnes.

no one is missing out on shit. it's just another garbage record.

Six Feet Under - Crypt of the Devil