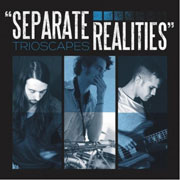 1. Blast Off 2. Separate Realities 3. Curse of the Ninth 4. Wazzlejazzlebof 5. Celestial Terrestrial Commuters 6. Gemini's Descent
2012 Metal Blade Records
Our score 8
by Daniel Marsicano
5/17/2012
Between The Buried And Me bassist Dan Briggs has been keeping himself occupied on the side with Orbs, which released their prog-heavy debut Asleep Next To Science back in 2010. Briggs is now sporting a new project that is unlike anything he has been involved with to date. An instrumental jazz fusion band by the name of Trioscapes, many fans of Between The Buried And Me will be flabbergasted at their first record, Separate Realities. It's very hard to retain the music at first, but for an open-minded individual, giving it time and repeated spins pays off. Joining Briggs on the album are Walter Fancourt on saxophone/flute and Matt Lynch on drums/electronics. Those wondering, 'Where's the guitarist?,' will be dismayed to hear that there is not one note of rhythm or lead guitar on this album. For a large part, it's just saxophone, bass, and drums. The trio gets mileage out of these three instruments, using distortion, pedals, and other effects to give them an abrasive and crass sound. Fancourt's saxophone, in particular, shrieks and cries out in agony. These wails do become very unpleasant at times, though that might have been the band's intention. There are moments of Zappa-inspired craziness on the opening cut "Blast Off," but Trioscapes is not just a prototypical jazz fusion band that you'd hear in some smoky club as background music. These songs have a groove to them, a pulse that beats to the tight-as-a-knot rhythm section. Briggs has always been known as a supreme bassist, but he puts himself into another category with his playing on the title track and "Curse Of The Ninth." Unlike other instrumental albums, Separate Realities doesn't feel pasted together, nor does it employ awkward transitions. Most of these songs fit the length they are assigned, though the title track stretches its 11 minutes near the breaking point. The jazzy shuffle and jamming percussion of "Wazzlejazzlebof" make better use of a lengthy transaction. While much of these songs are upbeat and, at times, aggressive, closer "Gemini's Descent" is restrained in its stature. Fancourt busts out some flute like he's Jethro Tull's Ian Anderson, and Briggs keeps a steady bass line, ultimately moving the song towards its bass-only outro that stops in abrupt fashion. Trioscapes won't be a moneymaker for anyone involved, nor will it be something the members can do full-time. This is the definition of a side-project, yet that doesn't mean Separate Realities is a throwaway album. For someone that enjoys various styles of music, this 40 minutes of jazz fusion will be comforting. It's great to not only see Briggs stepping outside his genre, but Metal Blade releasing and promoting an album so far removed from metal. It may have Briggs' star power behind it, but Separate Realities stands proudly on its own. Bottom Line: A unique instrumental jazz fusion project for Between The Buried And Me bassist Dan Briggs, rife with eccentric playing and a jam-like atmosphere.

if you think for one second I read this review or will listen to this steaming loaf well-hell-elll...

wait... middle guy looks like he's wiping a load off his chin. Will listen, now.

ironically enough the album cover concept intentionally or not reminds me of the Blue Note series example Coltraine or Davis ;)

they shouldn't play jazz/fusion.. it just doesn't sound very good. for anyone thats a fan of that music at least.. its just someone not specializing in something and doing it anyway, just leave it to the real players on that note.

Anyone who doesn't think this album is good is stupid.

Solid interplay and some solos. Excellent drumming considering the demands of creating a good feel in a trio. If Rush wasn't still around I'd say they're the new black.

Honestly? This album is awesome

I enjoy this album Hella, t.r.a.m. & trioscapes are two of the same, I actually way enjoy that there is no lead guitar, but there is lead bass. Beautiful album <3