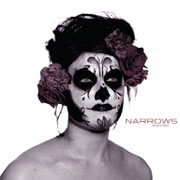 01. Under the Guillotine 02. TB Positive 03. Absolute Betrayer 04. Greenland 05. It's the Water 06. Face Paint 07. Final Mass 08. SST
2012 Deathwish Inc.
Our score 7
by Nick
5/15/2012
Just when I was about to applaud Narrows for pumping out yet another full-length so quickly, I double-checked the release date of New Distances. A hair under three years ago, it turns out. So while I've apparently mastered the art of time travel, an entirely reasonable period of time has passed for Painted to come to fruition. Needless to say, its arrival is welcomed, regardless of your own personal understanding of the time space continuum. In terms of what can be expected, any previous Narrows reference point will do, as they're all worthy starters. Catchy, modern hardcore accentuated by cleverly interwoven guitar parts and that loveable Dave Verellen scream has been the norm these five dudes have previously laid out and continue to provide throughout the eight tracks of Painted. And this time around, it sounds like somebody has ratcheted up the fullness in the recording -- this is definitely the beefiest sounding recording to date. "It's the Water" is the best example of these guys firing on all cylinders. Everything from the highly catchy bass-and-drum lockstep groove that starts off the track to the complementary guitar lines just after the one minute mark -- each of an entirely different beast, yet a perfect pair when laid over Rob Moran's low-end -- is a testament to still loving the energy inherent in hardcore, even after such an extended presence in the scene. The preceding number, "Greenland," also deserves some praise, albeit for entirely different reasons. Nearly three and a half minutes of electronic-tinged noise backed by distorted drums and background screams eventually give way to a slow-paced, somewhat hypnotic dirge. When placed back-to-back, these tracks are one hell of a songwriting showcase. As much as there is to be loved, there are a few areas that leave something to be desired. The final three tracks shift more into mid-tempo paces with choppier rhythms, and while they're still offering up some of those aforementioned stellar hardcore guitar duets, fail to end the record with the same punch with which it began. And for as much as the guitar work has impressed, it's still hard to get behind the meandering leads that close out "Absolute Betrayer." They seem to be shooting for a noisy, reckless feel, but come off a bit tired instead. If there was a way to get this beefy of a recording and this next level of guitar wizardly back into some of the band's previous up-tempo anthems (especially the debut seven inch -- I still can't get enough of that), we'd have the perfect band. But as it stands, this is still pretty badass. Bottom line: After so many years of being involved and influential in hardcore, the veterans that make up Narrows are still putting out forward-thinking, highly relevant tunes. It's proof that this music continues to mean so much to both the band and the community, even as hair departs craniums, backs begin to ache, and soles begin to flatten after far too many years of wearing arch support-challenged Vans.

Did you really just review an album almost 3 months after it came out? You fail. Keep up with this shit. The album is good.

^ I was thinking that same thing..but yeah f*cking killer stuff. Artwork sucks though

This was actually reviewed 2 months ago, but there was a screw-up on our end, so it didn't get posted until today. Get over it.

shit is boring as f*ckkk

One of the better records so far this year.

i heard this was really boring.

actually, bardamu, dave verellen's really low in the mix on this album. in fact, compared to a lot of metal releases out there, he's mixed like, half as loud. the guitars are actually the loudest part of this record. in fact, it really surprised me how low in the mix he is.