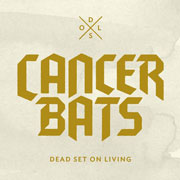 01. R.A.T.S. 02. Bricks And Mortar 03. Road Sick 04. Breathe Armageddon 05. Dead Set On Living 06. The Void 07. Old Blood 08. Drunken Physics 09. Bastards 10. Rally The Wicked 11. New World Alliance
2012 Metal Blade Records
Our score 8
by Luke Henderson
5/8/2012
Beginning with 2006's Birthing the Giant, Toronto, Ontario's Cancer Bats' attempt to fuse punk, rock, metal, and hardcore has largely been met with mixed reactions from various music communities. Often accused of being too metal for punk or too punk for metal, the group has always seemed to make it their mission to disregard any musical label placed on them in favour of creating a uniquely confrontational and aggressive sound. The band's particular mix of punk/metal has largely been hit-or-miss up until this point. The blending of spoken-word vocals, impassioned screams, fast punk riffs, and metallic grooves often seemed awkward, especially on Birthing the Giant and Hail Destroyer. Fortunately, their newest album, Dead Set on Living, shows that this genre-bending group is growing into the band that they've always strived to be. To begin the album, "R.A.T.S." shows how Cancer Bats are able to blend punk rock verse riffs with a groove-inspired chorus fluidly and efficiently. With vocal help from Sacrifice's Rob Urbinati, this song is an apt preview of the entire album: anthemic choruses, stylistic diversity, and impressive song-writing. "Bricks and Mortar" and "The Void" help the album progress by demonstrating guitarist Scott Middleton and bassist Jaye Schwarzer's ability to write imposing groove metal riffs, while still honoring the group's punk rock roots. It quickly becomes apparent, despite many notable tracks on the album, that "Old Blood" is the stand-out song on Dead Set on Living. The relentless metallic punk riffs, furious vocals, and non-stop intensity of this song help explain why it was rightfully chosen as the album's lead single. Unfortunately, this song is quickly followed by the two of the album's most forgettable tracks, "Drunken Physics" and "Bastards" (feat. guest vocals by DevilDriver's Dez Fafara and An Horse's Kate Cooper). There is nothing objectively wrong with these songs, but they seem directionless and lack the energy found throughout the rest of the album. Luckily, the momentum returns with "Rally the Wicked" and "New World Alliance," which feature some of the album's darkest guitar work and most frantic vocals. Bottom Line: This is easily Cancer Bats' most impressive effort to date. While there are a couple of mediocre tracks, Dead Set on Living proves how exciting this type of punk/rock/metal fusion can be when done correctly.

Holy shit an album that isn't your run of the mill metal sludge shit got a good score? The legions will flame this one to no end. Bad ass band though.

I think cancer bats are the flag holders for the new Metal sound ! I love it End of story