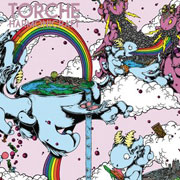 01. Letting Go 02. Kicking 03. Walk It Off 04. Reverse Inverted 05. In Pieces 06. Snakes Are Charmed 07. Sky Trials 08. Roaming 09. Skin Moth 10. Kiss Me Dudely 11. Solitary Traveler 12. Harmonicraft 13. Looking On
2012 Volcom Enterainment
Our score 9
by Nick
4/24/2012
Torche is back. Four years after the release of their landmark Meanderthal, a record surely destined to be labeled as seminal after just a few more years pass, the niche of music that the band occupies has morphed. The blending of heaviness and melody is no longer even close to being even somewhat unique, as the adjacent so-called post-metal sound has reached maturity and then some. Stellar offshoot bands have taken the Floor/Torche sound and continued to do wonderful things (see: Black Sheep of Kali and Karysun for starters), so these Miami dudes are no longer the only ones sitting at the table. It could be said that the crowding in this part of the heavy music spectrum makes it impossible for Torche to pull off something as defining as Meanderthal. Spoiler alert: Harmonicraft comes pretty damn close. Despite the hole left by an ever so slightly inadequate Songs for Singles and a personnel shift in the second guitar slot, the first thing this record proves is that the band never really left. The one-two punch of "Letting Go" and "Kicking" are the bread and butter modern Torche tracks, nailing that up-tempo blend of vocal hooks, warm distortion, and instant catchiness destined to make your summer of 2012 better than that of 2011. After all, this is first and foremost a rock record -- fans seeking bomb strings and bomb strings only need look elsewhere. What is most impressive about Harmonicraft is Torche’s ability to continue to push songwriting in multiple directions. Dueling leads fuel both the arena rock theatrics of "Snakes Are Charmed" and the almost video game theme-esque, pulsating title track, neither of which closely resembles anything else the band has previously laid to tape. Moving in the opposite vector is "In Pieces," a song rooted in a metal background thanks to its chugging riff overlaid with a guitar red-lining in a slow moving chord progression (tonal ecstasy follows). It’s heavy and still catchy as all would expect, but pulls from a realm of metallic inspiration that feels brand new. They wrap it all up with "Looking On," a jam that recalls the band’s other bread and butter trick: relaxed tempos and simple song structures with some serious amplifier loving á la Torche 2006. A hell of a closer, indeed. Harmonicraft impresses on all fronts, giving equal time to both new ideas and the original mentality that rocketed these dudes to where they are today. Almost the only thing that Meanderthal has on this one is that it showed up at a time when few were anticipating a record filled not with "Tarpit Carnivore"s, but with gems like "Fat Waves" and "Healer." Harmonicraft is likely to be more in-line with current expectations, but arrives with enough ingenuity to stay ahead of the pack. Good luck finding a better rock record in 2012. Bottom line: In 15 years, all of the cool kids will be shelling out their hard earned cash for Torche vinyl box sets. You’ll be older and far less cool, but man, you will have been there. Watching this band progress is rewarding to say the least. Harmonicraft doesn’t disappoint.

i've heard all of their albums and can't tell you what any single song means or is about. i'm sure this one is just as profound...

This band is terrible. I dont get the appeal

This album is fantastic....no question.

Listen to High on Fire's record De Vermis Mysteriis. Madness of an Architect and Samsara rules it!

all their songs are about rainbows & their constant search for the skunk ape. there, mystery solved.

This album is really good - yea it's more a rock album than anything else, but still really good.