Angel Witch As Above, So Below 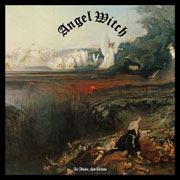 1. Dead Sea Scrolls 2. Into the Dark 3. Gebura 4. The Horla 5. Witching Hour 6. Upon This Cord 7. Guillotine 8. Brainwashed
2012 Metal Blade Records
Our score 8
by Daniel Marsicano
4/9/2012
In 1980, at the height of the NWOBHM movement, Angel Witch released a magnificent eponymous album. Energetic and unrefined, this album should have casted them along with Iron Maiden, Saxon, and Def Leppard as one of the premier bands in the NWOBHM era. Instead, Angel Witch failed to make claim to that title, falling apart under a lack of lineup consistency. Vocalist, guitarist, and founding member, Kevin Heybourne did all he could to keep the band alive, and the rotation of members would make Abigail Williams tense up in shock. Yet, over 30 years after Angel Witch’s debut, the band continues plugging along. The last decade or so has been constant touring, winning over a new generation of listeners who weren’t even born yet to bear witness to the grandeur of “Angel Of Death” or the sloppy bliss of the band’s signature anthem “Angel Witch.” As Above, So Below appeared almost out of thin air to act as the band’s first official studio album since 1986’s Frontal Assault. Not only has it been that long since a new Angel Witch record, but it’s also the first album since their self-titled to have Heybourne back at the lead vocalist position. It’s possible that there are fans who have been waiting with bated breath for a new album since the mid ‘80s, and those fans shouldn’t be disappointed by As Above, So Below. It’s not as loose and youthful as their first record, with the uninhibited guitar solos and screechy falsettos replaced by mature songwriting and a restrained vocal performance that is Heybourne at his best. The album is split between newly-written material and songs that have been floating around since the band’s early days. Angel Witch is able to make them mesh to the point that it’s hard to tell which ones are which without being told beforehand. A strong galloping riff drives “Dead Sea Scrolls” through its six minutes, stopping off for flashy guitar leads from Heybourne. All of these songs are over five minutes, much longer than most of the band’s past material. While there are a few parts that drag, especially on “The Horla” and “Brainwashed,” the band is able to keep the songs moving at a fast clip. There are moments (e.g. the infectious “Gebura”) where the spirits of the past awaken. The listener is transported to a time before thrash metal exploded and before Venom would be “At War With Satan.” The production is modern, and age has wised up Heybourne as a musician and songwriter, but there’s still that wild madman unconcerned with the trends of today's metal. With all the djent-wannabes and “br00al” death metal bands mucking up metal, a band like Angel Witch has the capacity to stand out in a way they couldn’t back in 1980. As Above, So Below is not as innovative or jaw-dropping as their self-titled record, but it does avoid sounding retro or passé. If you asked anybody five years ago if Angel Witch would ever release a new album, they would either give a resounding “No!” or shake their heads because they had no idea who the hell you were talking about. 2012 is a better time than ever for Angel Witch to proclaim their position as one of the lost relics from the NWOBHM scene. Bottom line: It took almost 26 years, but Angel Witch have returned with a studio album that will be enjoyed by old and new fans alike. Their traditional heavy metal livens up the stagnation from the endless barrage of modern death, black, and thrash metal.

Someone get me the Viagara; i can't seem to get stoked on this.

Not very good at the NWOBHM time, even worse now. I listened to it 1.5 times and now skip over it when it comes on shuffle.

First, you clarify for those of us that couldnt care less about hair metal.. what NWOBHM is. Then, from there on, you refer to it as NWOBHM. This is a professional review. Write like a scientist.

Seriously, though. What is NWOGHSKJGJSDFHM?

Buy As Above, So Below Comments (8) Angel Witch profile Album reviews Featured bands