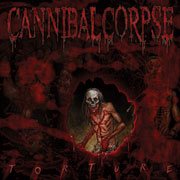 01. Demented Aggression 02. Sarcophagic Frenzy 03. Scourge Of Iron 04. Encased In Concrete 05. As Deep As The Knife Will Go 06. Intestinal Crank 07. Followed Home Then Killed 08. The Strangulation Chair 09. Caged... Contorted 10. Crucifier Avenged 11. Rabid 12. Torn Through
2012 Metal Blade Records
Our score 7
by Daniel Marsicano
3/15/2012
Torture is the prototypical Cannibal Corpse album, one that the quintet could do in their sleep at this point. It's the usual stock of rapid drum beats, guttural vocals, thumping bass, and cut-throat guitar riffs the band has been writing since they screamed onto the scene in 1990 with Eaten Back To Life. Cannibal Corpse have never produced an outright awful album, and Torture continues in that vein. The surprise quota is low, but that doesn't take away from the excellent songwriting and the band's innate ability to write familiar, yet memorable, death metal tunes. The three years between Evisceration Plague and Torture must have done Cannibal Corpse well, because this album feels like the most definitive collection of tunes from the band in over a decade. While the past few albums have had throwaway numbers ("Scalding Hail" and "Maniacal"), no song is under three minutes on Torture. That is significant, as it forces the band to rely on more than just throat-slicing speed to satisfy their lust for blood. Nothing slinks along lifelessly like the title track from Evisceration Plague, but invites itself over like a sophisticated gentleman before going all Patrick Bateman on the proceedings. This is a Cannibal Corpse album that's being discussed, so the anticipation for violent, gritty tunes is high. Even with a pristine mix and crisp production, songs like "Demented Aggression" and "Torn Through" are grimy enough to want a shower after hearing them. Cannibal Corpse's undying passion for graphic lyrics has not subsided, as gore-aholics will get their fill from the painful "Intestinal Crank" and the potential love-letter from a psychopath "As Deep As The Knife Will Go." This current line-up has been steady for years now, and guitarist Rob Barrett has found comfort in standing alongside Pat O'Brien in making a formable guitar duo. Their wah pedals get good use during the solos, most notably on "Encased In Concrete." With better production comes another opportunity for Alex Webster to further his legacy as one of the best bassists in death metal. Webster lets out some technical leads on "The Strangulation Chair" and "Rabid," but is exciting to listen to even when plucking away in the background. Cannibal Corpse have no reason to try anything other than pummeling death metal, and Torture continues the hot streak the band has been on since 2006's Kill. Most people know what they are getting themselves into by submitting to Cannibal Corpse's wickedness, and Torture is another strong group of songs that show the band still have life left in them. It's not something that will shake the very core of the genre, but nobody expects Cannibal Corpse to do that after almost 25 years together. Bottom line: After 12 albums, Cannibal Corpse is still writing solid death metal songs with the best of the up-and-comers. Torture is not an evolutionary step forward, but another record to add to their growing legacy.

are you seriously talking shit about evisceration plague in your review right now? that album is perfect and brutal. the only non-perfect cannibal albums are bloodthirst and gallery. don't EVER talk shit on the corpse again gay.

Haven't really listened to CC too much but I just picked this one up. I really like it so far.

Why don't people like Gallery Of Suicide? The riffs are evil as f*ck, some of their best lyrics/vocal patterns and it's f*cking groovy.

Gallery of Suicide is actually amazing, I have never heard of someone not liking that album.

i love gallery but it is weaker than a few of them.

Bloodthirst is actually still my favorite CC album, but everything else is great also. Torture is definitely better than Evisceration Plague, not sure yet if it's better than Kill.

i celebrate their entire catalog.

Cannibal Corpse F***s all your favorite bands in the butthole with its gloriously hulking, throbbing, and pulsating blood sausage. FELL THE PENETRATION AND THE DESTRUCTION OF ALL THE POSERS!!! DEATHCORE BECOMES LIKE AN OVERWEIGHT, SLOPPY PROSTITUTE GIVING HJ'S FOR 50 CENTS A POP! TAKE IT IN THE FACE gayS!!!! TAKE CANNIBAL CORPSE'S MEMBER ALL THE WAY DOWN!!!!!

Guy below me winz

Gas is $4 a gallon, the health care law is being challenged in the Supreme Court, and the GOP is offering up Mitt Freaking Romney. i don't have time to listen to songs about eviscerating prostitutes.

@therearetoomanybands, I actually get what you're saying, but you listed a few of the reasons I actually listen to this stuff. Have to release my frustration and anger somehow and listening to death metal is better than acting out the lyrics! haha

u dont have time to listen to death metal but u have enough time to act like an jerk and talk shit on the internet. way to use your precious time.

Set your own life easier get the <a href="http://goodfinance-b log.com">loan</a> and all you require.

do what i want 'broken hero'..f*ck the corpse