Every Time I Die Ex Lives 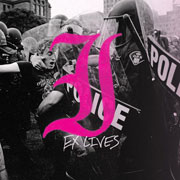 01. Underwater Bimbos From Outer Space 02. Holy Book of Dilemma 03. A Wild, Shameless Plain 04. Typical Miracle 05. I Suck (Blood) 06. Partying Is Such Sweet Sorrow 07. The Low Road Has No Exits 08. Revival Mode 09. Drag King 10. Touch Yourself 11. Indian Giver
2012 Epitaph Records
Our score 8
by Brian Shultz
3/5/2012
While the mid-point of Every Time I Die's career brought them arguably their highest mark of commercial success following 2003's lauded Hot Damn!, it may have been a creative low point. The band had been further infiltrating their hardcore-influenced, southern-flavored metal with shades of sleazy dirtbag rock, but something seemed off with the disappointingly inconsistent Gutter Phenomenon in 2005. Every record since has found the band refining and rebranding just what they're about and what they're capable of, and thankfully, Ex Lives is no rut in this ever-improving journey. Is Ex Lives the band's heaviest record? Nah; that'd be 2001's Last Night in Town. Is it their best? Nope—that's still Hot Damn!. It is, however, their most creatively ambitious and stylistically diverse. What's key is how well the band hone their hallmark traits without strictly pandering to either fans or themselves. This much is evident when repetitively delicious opener (and appropriately, the first song premiered from the album at the start of the year), "Underwater Bimbos from Outer Space" opens with the sort of panicked, pounding chaos one might hear from quasi-contemporaries the Dillinger Escape Plan, and while there's plenty of variation on the record to follow, it sets the tone. Keith Buckley might be drawing a point of smug self-referentialism when he declares "We made the scene / when we made a scene," and after that, perhaps points to the glut of watered-down copycats that followed in Every Time I Die's wake: "Oh, what a pity. / Now they're bound to make us saints." These are exactly the cheeky turns of phrase and the shit-eating-grin bravado that made the band a delightful, intelligent anomaly amid the wealth of too-serious, straight-laced dark hardcore/metal acts they arrived with in the early 2000s, and it's good to hear that little has changed. But this doesn't at all prevent the band from trying new things, either. Fresh tones infiltrate "I Suck (Blood)," with juddering riffs out of Queens of the Stone Age's playbook, while the sneering, desperate sigh "Revival Mode" explores the melodic hard rock of Buckley's side project, the Damned Things, to far better success and realization. Alternately scathing/ruminative closer "Indian Giver" bears some of this in a more chilling mode and briefly picturesque narration. "Partying Is Such Sweet Sorrow" opens with a playful bluegrass banjo; two minutes later, Buckley's barking one the most fierce and compelling hooks of the entire record, a declaration that finds him trying to sway someone's judgement of him: "I am not the company I keep." Tempo shifts and changes have always been an ETID standby, and they liven up frenetic cuts like "Holy Book of Dilemma," "Touch Yourself" and bonus track "Grudge Music" with the type of punk aggression people probably tend to forget the band still retains. Bottom Line: To stay relevant this late in your career is an arduous task, but Every Time I Die seem to have one-upped such an obstacle. That they're essentially in the midst of a career renaissance is even more impressive.

"but something seemed off with the disappointingly inconsistent Gutter Phenomenon in 2005" ...are you shitting me?

last night in town was their heaviest, AND best, easily. it's the most "southern rock free" of all of their albums. f*ck southern rock, this band making a gimmick out of it in metalcore, despite how good they are at it. it's just f*cking boring, and the less they do it the better.

I feel like Big Dirty was definitely their low point. Gutter Phenomenon wasn't terrible but definitely a step in the wrong direction. Last Night in Town is my favorite and New Junk Aesthetic is surprisingly solid and consistent throughout and I think it's a great album. I agree that Ex Lives is also great, just a step below NJA, probably, but it definitely is stylistically diverse, as outlined in the review, and that's what makes it stand out.

Stopped reading after proclaiming Hot Damn! to be their best effort. "Nah; that'd" still "be 2001's Last Night in Town." Hot Damn! is patronizing trash and the only slightly interesting song on this record is "Drag King."

I listened to this album about 5 times and still think there's a missing link between the tracks. Anyway, It was pretty descent in my opinion. I'd give it a 7 out of 10. 'The Big Dirty' is a way funnier and bold album and same thing goes to 'New Junk aesthetic'.

Lambgoat says Hot Damn is the band's best although the official score is 7/10, meanwhile this gets a 8/10 and Last Night in Town has a 9/10 good job Lambgoat!

did it ever occur to you, guy below me, that different people wrote those reviews rather than the same guy? idiot

This is definitely one of the best ETID albums, it's no Hot Damn, but it's damn close

lets not shit ourselves, "Hot Damn" was a good record but it is cookie cutter metal-core.

Everything these guys have done since Hot Damn has been awful. I almost puked when my eyes saw the 7/10 rating. Checked out the vid off this album, and was genuinely shocked at just how atrocious it is.

Anybody who enjoys this band, or this record,has awful taste in music.

anybody who doesn't enjoy this band, has awful taste in music

damn so many stupid mother f*ckers commenting on here. especially the dude who said Hot Damn was 'cookie cutter metalcore' what!? ETID is and has always been amazing. I understand it's a matter of opinion but f*ck your opinions haha.

Some of these comments make my head spin with the amount of stupidity in them. Great band great album. They never disappoint. Anyone who says otherwise still listens to.... sigh... deathcore. Puke.

Come on...My favorite albums are Hot Damn and Last Night, but Ex Lives is probably my favorite after those two. The band grew up and didn't wanna play "Cookie Cutter Metalcore" anymore, and yet people(not the guy who said that) still bash them. I hope there is one person here who isn't on the Djent train. That is boring.

Don't kill yourself if you like this album. You deserve to suffer thru life like everyone else who chooses life. f*ck you you scum.

Last night in town is the only thing this band did that mattered. Fight me at the steamy gates of your mom's pssyhole if you think otherwise.

i will always love this band

the guy praising NJA is an idiot, that album's their most boring. big dirty was great. this album is the best since hot damn. good review.

This is their heaviest, fastest, and quite possibly their best album to date. Dear ETID, Great Job!

Actually blown away by some of the comments these people are posting. This album is a combination of everything that makes ETID what they are. It has the intricacy and intensity of Hot Damn combined with the songwriting ability that they displayed on Gutter and The Big Dirty. It's a natural evolution. They are a finely tuned machine. I can't believe people are even mentioning Last Night In Town, this band has grown so much since then. Ex Lives is awesome.

^^^ the poster above me blows goats. I have proof.

this is the only etid record i could listen to since Burial Plot... came out.

Jesus some of these comments have to be from either band or the record label. Albums sucks a fat dck.

"Fight me at the steamy gates of your mom's pssyhole if you think otherwise." probably the greatest thing ever said on the entire internet.

Last Night in Town > Hot Damn > Don't Give a f*ck About This Band Anymore.

all of you posting comments calling people who enjoy this band or this album scum, idiots, gays. etc; does that make you feel good? do you feel like a badass now? the majority of you are posting anonymously anyway. so you don't like anything this band has put out since their first 1-2 releases...great, move on with your lives. no need to bash a good band that is actually talented and people do enjoy. you haven't accomplished anything by doing so. please get over yourselves, and grow up.

anonymous posted 18 hours ago the majority of you are posting anonymously anyway.

been into this band since burial Plot.. then of course Last night in Town. Hot Damn was great and after that, I fell away from the band. I decided to check this record out and I really dig it. its a fun and heavy rock/metal record

I love everything this band has ever done! Don't like them? Then why the f*ck are you commenting on this for?

personally i think Gutter Phenomenon and The Big Dirty both shit on Hot Damn.. Why are metalheads so afraid of melody and hooks? This mantra of "this shit isnt heavy enough" is getting really stale. It doesnt have to be 100 miles an hour and have no melody to be metal.

every record for me kills it, best band on the planet right now imo.

I didn't feel like this album had the same *umph* to it as some of their earlier material, but it's a good album nonetheless.

Every Time I Die Album Reviews