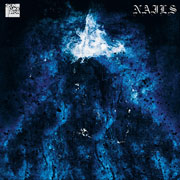 1. Disappear (Skin Like Iron) 2. The Parade (Skin Like Iron) 3. Annihilation (Nails) 4. Cry Wolf (Nails)
2012 self-released
Our score 8
by Luke Henderson
1/6/2012
California has once again proven itself as a breeding ground for heavy music with the newest split from Skin Like Iron and Nails. Combining hardcore with more metallic elements, San Francisco’s Skin Like Iron and Oxnard’s Nails continue to help put the Golden State back on map when it comes to extreme music with this self-released EP. First of all, to simply call this split a “hardcore” album would be incorrectly pigeon-holing both bands. Skin Like Iron seems to have taken up the torch left by bands like Integrity and Pulling Teeth, mixing more traditional hardcore elements with thick, metallic guitar tones and throat-shredding vocals. Nails, on the other hand, have traded in many of tricks learned by guitarist/vocalist Todd Jones in bands like Terror and Carry On for a more grind-influenced brand of hardcore. The split begins with Skin Like Iron’s "Disappear," which very much acts as a two-part song (despite clocking in under 3 ½ minutes), with the first half being an intensity-building intro that acts as the perfect pre-cursor to the remaining 2 minutes of feedback-laden fury. Skin Like Iron’s second contribution to this split is "The Parade," which continues to prove that this group draws as much influence from thrash metal as they do from any hardcore act. While neither track demonstrates the atmospheric or melodic tendencies that Skin Like Iron have shown in the past, both songs demonstrate that this is a band to be reckoned with in the larger hardcore scene. While Skin Like Iron’s more straightforward metallic hardcore will satisfy even the most discerning listener, it is the Nails half of this split that truly demonstrates just how crushingly heavy this brand of hardcore can be. "Annihilation" begins Nails’ half of the split with the same thick guitar tones and lightning fast double kick that the band’s fans have become accustomed to. This track’s sonic onslaught is only interrupted by expertly executed breakdown that is far more reminiscent of traditional hardcore than any other element of this split. Little can be said about Nails’ second contribution to this album, aside from the fact that it is a 24-second assault on the senses that would make the most ardent Napalm Death fan proud. While nothing on this split would qualify as great departure for either band, it seems as if both Skin Like Iron and Nails were able to take the best elements from their previous releases and combine them on an album that is sure to welcome all challengers in 2012. Bottom Line: Skin Like Iron and Nails are both bands that should be on the radar of hardcore and metal fans alike, and this release shows exactly why.

did a hot topic employee write this?

Over-rated scene-core, really...especially Nails. If I want to listen to metal I'll get it from metalheads, not scenesters posing as headbangers. Kids these days...

Solid review. It's good to see SLI get more press, they are highly underrated.

if they did, it would suit this f*cking garbage.

Grammar, check it out sometime.

Why is it that everyone who comments on these reviews has no idea what the f*ck they're talking about? "scene core" get your head out of your ass you joke and take that shit elsewhere. What the f*ck do you know?

Lol @ every kid wearing a Nails beanie at local shows thinking they are tough shit. Get over your gay fat f*cking selves you humpty dumpty lookin white trash retards

How is this "scene" ?? this originates from thrash and original hardcore which you obviously know nothing about. If you want something "scene" go listen to attack attack or some gay ass whitechapel. These comments are as ignorant as slayer fans.

f*ck you who says Nails sucks or is bad, they are one of the most inovative and original and extreme hardcore/grindcore/whateve r band in the world!