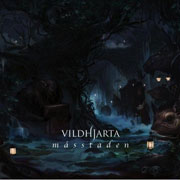 01. Shadow 02. Dagger 03. Eternal Golden Monk 04. Benblåst 05. Östpeppar 06. Traces 07. Phobon Nika 08. Måsstadens Nationalsång 09. When No One Walks With You 10. All These Feelings 11. Nojja 12. Deceit 13. The Lone Deranger
2011 Century Media Records
Our score 7
by Brian Krasman
1/2/2012
So this Djent thing. Are we really doing this? Like, it’s going to continue being a thing? Ugh. OK, then. I guess I’ll just kind of lay low on this whole movement until we get into something else. Except before I check out I have to talk about this debut album from Vildhjarta, a new band out of Sweden that seemingly puts the capital A in ambition. This Djent thing, or palm-mute heavy prog metal, or whatever, is blowing up right now, what with the sudden popularity of bands such as Animals as Leaders, Textures, TesseracT and any number of bands on the Sumerian label. They all seem to jumble into one big mess when I think about them. But I have to admit, Vildhjarta feel a little different to me. The band’s debut record Måsstaden is an animal, or should we say plane of existence, unto itself. Yeah, you get all the sub-genre tendencies with these guys, but they also remember how to write decent songs. I find myself distracted and sometimes downright angry when hearing Djent – and I apologize for the continual use of that term – bands, and usually I can’t make it through more than two of three songs at once. But Måsstaden I was able to absorb as a whole many times. It’s catchy and at times a bit intoxicating, and their tales of the fictional town that shares the album title is at least interesting. I don’t know that they succeeded in making any poignant statements when discussing the trials and tribulations of Måsstaden, as it sounds afflicted by the same garbage that plagues any town or land. Someone easily could read these lyrics, not know there’s a concept involved, and simply think these guys – all 761 of them – simply are touching on inner struggles. But you're bound to take away some message. Something I noticed after repeated listens is this record sounds way better on headphones. There is so much going on that the elements can get lost or blend together if you don’t have the music inserted directly into your ears. Let the jokes begin on that line. The record’s mostly heavy, with those goopy, down-tuned mud pie sections we all expect from descendants of Meshuggah, and often the lead lines sound like they’re going off the page, but it’s par for the course. They have a steady collection of mashers such as opener “Shadow,” the wacky, thrashy and heavily dramatic “Eternal Golden Monk,” chaotic “Benblåst” and “When No One Walks With You,” that’s just convulsive. But they do some neat stuff to break up all this chaos, such as when they reach into the cosmos for trippy synth pockets that breathe air into otherwise volcanic “Dagger"; add some eeriness and beauty into “Traces,” a song that proves they have as much a knack for clean crooning as they do throat-warping growling; blend cool programming and equal parts cleanliness and filth into “Phobon Nika”; and even shake you up with off-kilter guitar work and compositional madness on “Måsstadens Nationalsång.” That one would sound pretty bizarre recreated by an orchestra at the make-believe Olympic Games. If you’re turned off by this whole Djent movement, I don’t imagine you’ll be all excited about giving Vildhjarta a chance. And look, I’m with you on that. But these guys do things a little differently and have a grip on making compelling songs. Yeah, there’s a ton going on and your ADD tendencies will benefit you when visiting this weird album (and town), but I hate to just lump this band in with everyone else entirely. There’s something a little bit unique going on with them that’s hard to put into words, but they’re worth a shot. I hope they take what they did here and build more prog and melody into their next record. Maybe sitting down with some Cynic and Opeth will get them there. If they don’t progress, then perhaps I was wrong about their ambition. Bottom line: Måsstaden is way more interesting than I expected when I judged this book by its cover. This band shows some promise, but we won’t know if they actually capitalize on that until we get a second record.

"Laughter is the c-m we spray onto the backs of sorrow." - dck Buttkiss, co-founder of the Djent Xperience

man, can the review writer try any harder? this band is pure shit, too.

anonymous posted 9 hours ago Suck my f*cking djent this sums up rather nicely my feelings about this review and band for that matter.

are new really doing this?

The record is enjoyable and different than all the other sub-genre style bands. I agree with the reviewer and give it a solid 7. It could have been better for me if they had a wider range of vocal element. They have to singers so I have to be additionally critical there.

since when has the review writer been reviewing nu metal bands?

again your all gay enjoy all music as of why none of you prolly will come close to any talent in music but thats ok :) ill drink to this on my nice ass tour bus:)

Seriously, this reviewer act's as if "djent" will just pass, or like how "thrash" has never passed. One of the most annoying review's I've had to read.

New term for a genre that's been around since '89, when Meshuggah released their first demo… or is this "djent movement" you refer to the addition of the pop-rock type choruses infused with progressive metal?

anonymous posted 4 days ago New term for a genre that's been around since '89, when Meshuggah released their first demo… or is this "djent movement" you refer to the addition of the pop-rock type choruses infused with progressive metal? oh jesus shut the f*ck up. f*ck this kind of music

should of named the record Mastodon and wrote about a prehistoric sea beast. I might have checked it out.

This album is just incredible. Their skill and technicality is really something else, untouched in the "djent " movement as of yet. Except, of COURSE, by the progenitors, Meshuggah. Give it a spin or 20.

Love this band, they're definitely talented in a sea of never ending copycat bands. Every band plays doom metal or black metal now, which is funny as hell...cuz we all know you were listening to limb biscuit when that shit came out f*cking trolls. Everyone that commented here are just a bunch of internet trolls. Ya know what really sucks? The people that review and tell people whats cool never leave their computer desk. f*ck You.