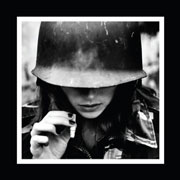 1. Mondo Chaos 2. True Colours 3. Hate! Hate! Hate! 4. Death Is Birth
2011 self-released
Our score 8
by David Keevill
12/21/2011
An instant with the new Gallows EP, Death is Birth is like an instant of being penetrated by a fiery fist. The band have a new singer, and a new perspective, that isn’t just resigned to the gutters of London, but this EP remains an astoundingly furious demonstration of their punk roots. It’s not without justification that Gallows fans, on the departure of the distinctive vocals and outlook of Frank Carter and the consequent recruitment of Alexisonfire’s guitarist and lyricist, Wade MacNeil, were feeling slightly bereft. Carter is an undoubtedly passionate performer, a singer whose fury spits with every word he growls, and, whilst with Gallows, he funnelled the grime and the piss of London through to a receptive global community. MacNeil, on the other hand, has been with Alexisonfire for years, a band, who although occasionally falling within the punk sphere, is far removed from these wayward British cast-offs. However, any doubts that may have existed prior to the release of Death Is Birth have quickly dissipated as the shit-storm of "Mondo Chaos" kicks in. It’s important to say firstly that this is not the same band that Frank Carter left; whereas Carter-led-Gallows levelled their sandblasted cancer at their locality, shown in tracks like "London Is The Reason" and "Queensberry Rules," the MacNeil fronted troupe sets fire to the world, shown immediately in the repeated refrain ‘Hey, you say fuck the world...I say it’s already fucked’ on "Mondo Chaos." The distinctive guitar-bass-drum pound retains the same sound however, and the repetitive riffs come thick and fast, but lose a lot of the diversity found on Grey Britain. This isn’t to its detriment though, because what Gallows have achieved here is a dangerous and sudden statement of intent with their new frontman that sticks to their punk/hardcore clout rather than walking any other diverse climes. Additionally, for those of you who worried that the inclusion of a member of a Canadian post-hardcore/metalcore band into Gallows would soften the punk crust, Death Is Birth limbers up with the most frenzied and direct music they’ve ever produced. MacNeil’s voice is sandpaper and whiskey, and although not as distinctive as Carter's, is more than capable of searing through every song on this EP. The capability of MacNeil to convince on the track "Death Is Birth" is astounding, as he fits over Steph Carter’s insistent and piss-soaked riffs, making it sound as if this incarnation of Gallows had always existed. Bottom Line: This is a short and sweet shot to the head, and does exactly what Gallows have needed to do in presenting their newest bandmate. Instead of playing the change-of-direction card, these British punks have stuck to what they know and have just slightly adjusted their perspective. Essentially, however, the song remains the same, and we’re oh so fucking glad for it.

The band have new singer

The band have new singer? Yeah I think he f*cking said that in the review.

This is what I get for reading Lambgoat when I'm drunk: horrible reviews that will be even more horrible when my faculties return. There's nothing to be said for someone who criticizes and doesn't offer an alternative, but there's even less to be said for this clown's "review." Horrible.

@redandblackink - What is your point? Your contribution is worse than all the other inane trolling that goes on here because you go some way to explaining yourself and then just whine a bit when you get to the point. Don't like the writing, then that's fine. Solution: Do some yourself.

no Keev, what you need to do is post a public apology on here equal in word count to that absolute abomination of a 'review', then one for making all the dyslexics out there look so bad. change the score of the album to the 1/10 it deserves. finally, after a bout a week, remove the review itself, and replace it with only the apology letter. following that, resign and never go anywhere near any kind of writing endeavours at all. you're barely intellectually able enough for walmart HR.

Just one mistake it's Lags 'piss-soaked riffs'on death is birth not Steph. Otherwise cool review. They were amazing in London 2 weeks ago!!!

"an instant of being penetrated by a fiery fist"

Actually it's Lags guitar solo at the end of Death is birth!!!

Cheers for the heads up

this is the worst ep i've heard this year. and that is saying something. it's utter utter shit. you don't have to give every record a god review. especially when it sucks like this heap does.

Was this written by the Gallows fan club? You do know this wasn't a critique of anything, right?

how to pass from a fresh sound band to the shittiest third division every time i die rip off.

Holly shit you people are such cry baby bitches I love the new Gallows and this is a good review all hail Wade Macneil f*ck frank!!!!!