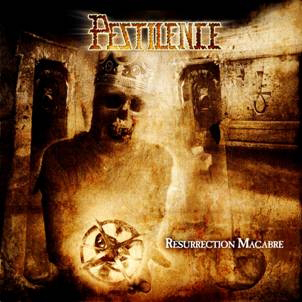 01. Devouring Frenzy 02. Horror Detox 03. Fiend 04. Hate Suicide 05. Synthetic Grotesque 06. Neuro Dissonance 07. Dehydrated II 08. Resurrection Macabre 09. Hangman 10. Y2H 11. In Sickness and Death 12. Chemo Therapy (bonus track) 13. Out Of The Body (bonus track) 14. Lost Souls (bonus track)
2009 Mascot Records
Our score 8
by Scott Ustel
6/30/2009
They have risen! The year 2009 hails the return of technical death metal champs Pestilence, originally formed in 1986 in the Netherlands. Sounding a little heavier and still able to rip one limb from limb, the band's current line up is not a full-on reunion. Instead, Patrick Mameli brought in former collaborator and notable bassist Tony Choy (Atheist, Cynic, Pestilence, etc) in addition to some new blood which comes in the form of Peter Wildoer (Darkane), who tenderizes the kit with his trademark technical prowess. Live they utilize the guitar skills of Patrick Uterwijk, however on Resurrection Macabre all guitar and vocal duties are handled by Mameli for the duration of the 56 minutes and 14 songs (3 tracks are re-recorded songs from classic Pestilence albums). Many death metal fans might complain that this album doesn't really sound like the Pestilence of yesteryear or that it gets repetitive. It is important to remember that the band took an almost fifteen-year break (Resurrection Macabre is their first record of original material in 16 years), disbanding in 1994. Time does not seem to have slowed them down, and in fact, all three members of this band manage to make this record sound like it was recored by a larger band half their age; the sound is amazingly full and intricate. With Mameli handling all songwriting duties, the material is bound to have a common thread. The guitars seem to weave in and around themselves before spinning off into other directions, almost out of nowhere. Not an easy task to accomplish when playing such technical death metal, but Pestilence delivers. I must say it is refreshing to hear a European death metal album that isn't about vikings or that doesn't sound like it came from Gothenburg. This album delivers quality riff after riff, not low end mush, thanks to Mameli's brilliant guitar tone and Choy's unique bass playing. Upon first listening to this record, it was hard to believe that these guys basically got together in and around 2008 to start working on this material, because they just sound so tight and together as a unit. I'm also pleased to report that this release presents a different side of drummer Wildoer, as he isn't playing to his usual blasts of thrashy melodic death metal; instead he is backing groove-laden death metal that is often very jazzy and off-kilter. Bottom Line: This album is far better and catchier than many would expect from a "reunion" CD. This band still knows how to smash some heads after 22 years.

No Martin Van Drunen, no care ever.

"I must say it is refreshing to hear a European death metal album that isn't about vikings or that doesn't sound like it came from Gothenburg." - You don't get out much do you? Plenty of good DM to go around here in the old EU ;-).

this album f*cking sucks. couldnt even get all the way through it without turning it off. and i love old pestilence.

i love to suck c-ck

Yeah yeah yeah Martin Van Drunen doesn't do vocals anymore. get over it. This cd is awesome for a death metal band who can still be more badass than most modern day bands.

devouring frenzy gets stuck in my head all the time.

this shit is badass

How does webby allow this.

i also let men beat me

really lackluster cd. also, this isn't technical death metal, just death metal. maybe 20 years ago it would've been, but not now. listen to augury, psycroptic, gorod, etc. that's modern tech death. sorry pestilence, but you're not all that impressive.